This is a continuation of a post from yesterday. I figured we needed some good numbers on the relationship between recruiting and performance, and I was uniquely positioned to do the analysis. If you want details on methodology or more results, check out the other post.

Using recruiting results and performance between 2006 and 2013, I estimated the impact of recruits on performance. Now I want to address an obvious follow up question: which teams have outperformed their recruiting classes and which teams have done worse. The table below has the team's performance in terms of points per game above or below what was predicted for them based on the strength of their recruiting classes. I break the results into two groups - 2006 to 2009 and 2010 to 2013.

We all could have guessed the teams that standout as over-performers. Boise State was first for '06-'09 and second for '10-'13, only because they were passed by Oregon. Boise State, Utah, BYU make the list for both periods, and Utah States makes the latter list; recruiting services might be missing something in the Utah/Idaho area. Oregon and Oregon State make both lists, as does Nevada. Navy and Air Force are both in the top six in '06-'09 and Navy makes the list again in '10-'13. Go America! And you know Saban has a good thing going when Alabama tops the recruiting ranks and is still among the top programs for performance relative to recruited talent.

We should take a moment and put Boise State in perspective. I found that a 4 or 5 star recruit is worth a little more than 1/2 a point per game for the next four years (I'll use .6 for this example). Boise State has been about 20 points per game better than their recruiting would suggest. This means the team was playing as though they had an additional (20/.6=) 33.3 4 or 5 star recruits on the team, or 8-9 more per class.

The under-performing list is dominated by dumpster fires, teams that no one thought would be any good, but turned out to be even worse. A few programs stand out: Michigan, Notre Dame and Florida State for the '06-'09 period and Texas for the '10-'13 period. Texas A&M and Utah State have the proud distinction of moving from under- to over-performing. Eastern Michigan, FIU, Idaho, Memphis, Miami (Ohio), New Mexico State, Tulane and UAB have the less-proud distinction of making both lists. Central Michigan fell from over- to under-performing. 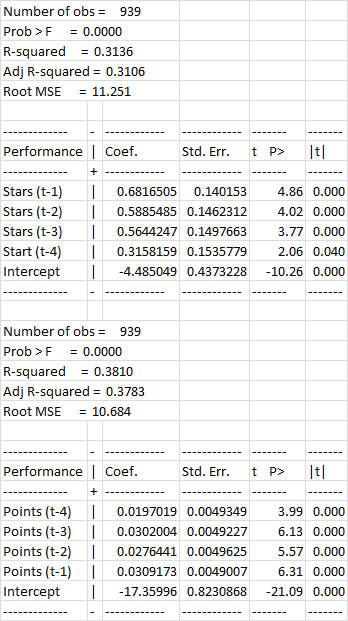