We recently added a new feature here at CFBTN. If you go to the Teams menu, you'll find the option to look at team statistics for 2005 to 2013. To celebrate, I've decided to do a short series on the best performers across a few interesting teams statistics since 2005. Today, we're going to look at opponent-adjusted effective points per possession (EP3+). 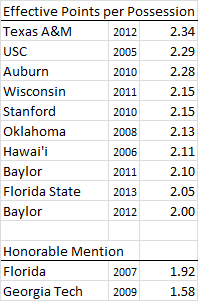 EP3+ is a measure of a teams offensive production. It is similar to points per possession, but has three advantages. First, EP3 takes field position into account. Second, it gives little weight to possessions in non-competitive situations. Third, EP3+ is adjusted for the strength of the competition. For the sake of brevity, I've listed those teams that have managed more than 2 effective points per possession.