An Analysis of Recruiting Class Rankings

The most under-appreciated story from the 2014 NFL draft is the Longhorn shutout. The academic juniors and seniors during the 2013 season, the players most likely to be drafted in the 2014 NFL draft, signed in 2010 and 2011. According to 247sports composite rankings, Texas signed seven 5*s and 27 4*s in 2010 and 2011, yet no Longhorns were drafted. Baylor, on the other hand, signed one 4* in 2010 and another in 2011. Five Bears were drafted last month (though they were all drafted on the last day).

Obviously, recruiting class ranking does not translate directly to performance on the field. Good players can be poorly coached, bad players in high school can be confused for good ones, and injuries or off-field issues can stymie otherwise promising careers. But the elite programs, i.e., those that play for national championships, recruit well and develop players once they are on campus, not one or the other.

That said, I used the 247sports composite rankings to determine which teams, in theory, can put the most talent on the field in 2014 based on the strength of recruiting classes between 2011 and 2014. 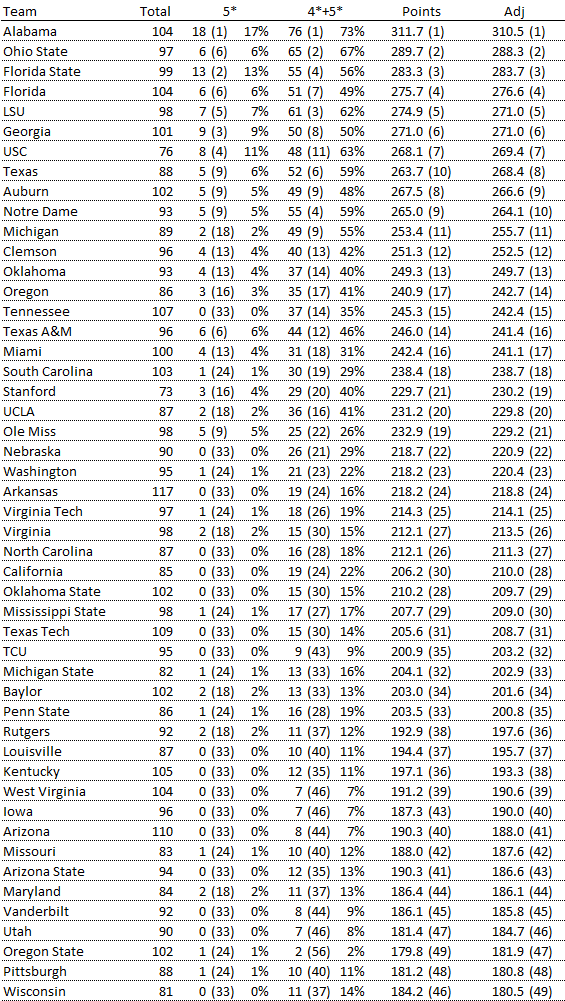 Alabama has signed 17 5*s over the last four years, and almost 3/4 of signees have been 4 or 5*s. The gap between Alabama and everyone else is substantial. Ohio State and Florida State have signed a lot of 4*s and 5*s, respectively, but they fall well short of the Tide in overall points.

One final points deserves attention. Because the adjusted points puts greater emphasis on senior classes, the difference between the average points and adjusted points gives us an indication of how talent is trending on campus. In most cases the two numbers are very similar, but if the adjusted points is higher than the raw average, this would indicate that the most recent classes were not as strong as past classes. By that metric, the team trending most strongly in the wrong direction is none other than our Texas Longhorns (tied with Rutgers). The explanations for this are many, but none is more important than the team that is trending most strongly in the right direction: Texas A&M.

Other teams trending in the right direction are LSU, Ole Miss, Kentucky, Arizona State, Wisconsin and Central Florida. Cal, Utah and Colorado are heading in the wrong direction. In fact, in the Pac-12 only UCLA, Arizona and Arizona State are trending up.
By Unknown