Offense in the BCS Conferences 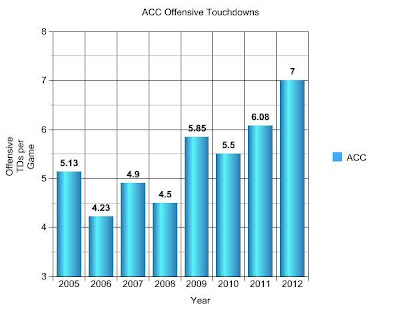 The ACC was actually the impetus for this research. Anecdotally, it appeared to me ACC games were more high-scoring in the last few seasons, and lo and behold, I was correct. Why was the ACC so offensively challenged from 2005-2008? For starters, only two ACC quarterbacks (Charlie Whitehurst out of Clemson and Matt Ryan out of Boston College) were drafted during that span. Meanwhile, in the past two drafts, the ACC has had four quarterbacks taken (Christian Ponder out of Florida State, TJ Yates out of North Carolina, Tyrod Taylor our of Virginia Tech, and Russell Wilson out of NC State/Wisconsin) in the draft with two likely to be selected this April (Mike Glennon out of NC State and EJ Manuel out of Florida State). The recent addition of Chad Morris and his up-tempo offense at Clemson as well as the hire of an offensive-minded coach like Larry Fedora at North Carolina has helped fuel the increase in scoring in the ACC. 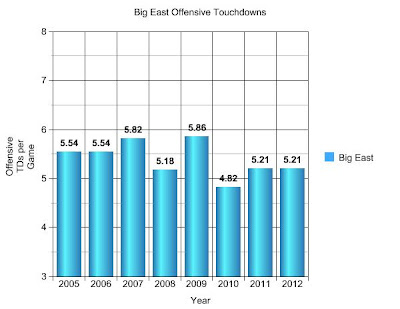 Despite the turnover, amongst its coaches, and more recently amongst its teams, the Big East has been remarkably consistent scoring wise. I find it interesting that the league did not reach its scoring peak when Rich Rodriguez and Bobby Petrino were coaching in the league (both coached in 2005 and 2006), but rather in the final year of the Brian Kelly-era at Cincinnati in 2009. 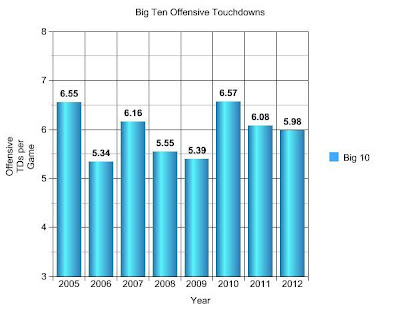 The addition of Nebraska has not dramatically affected the scoring levels in the Big 10. Scoring has decreased by a negligible amount in the two seasons the Huskers have been in the conference, but that has more to do with the turmoil surrounding Ohio State (2011) and the attrition at Illinois and Wisconsin (2012). The most interesting Big 10 season was probably 2007 when eight of the conferences eleven teams scored between 22 and 26 offensive touchdowns (2.75 to 3.25 per game). 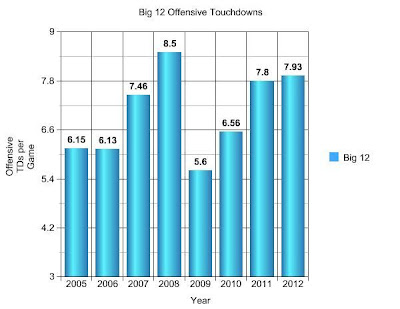 The Big 12 has a reputation as being the most offensively friendly conference, and the numbers seem to back up that conclusion. The Big 12 has finished with the most offensive touchdowns per conference game in five of the past eight seasons, and have never finished below fourth. You probably remember the 2008 season as the year Oklahoma scored over 700 points. In Big 12 play that season, the Sooners averaged 7.25 offensive touchdowns per game. 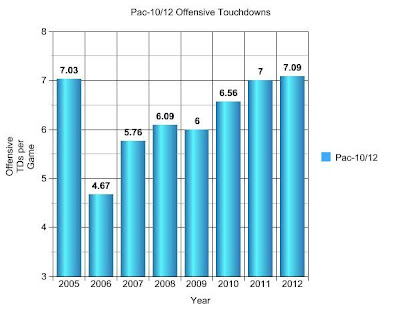 In 2005, behind the juggernaut Trojans and solid offensive seasons at Arizona State, Cal, Oregon, and UCLA, the Pac-10 featured the most offense in the nation. The next season with most of those players gone, only the ACC was less conducive to offense. Notice how the Pac-10/12 has been steadily climbing since Chip Kelly took the reigns at Oregon? 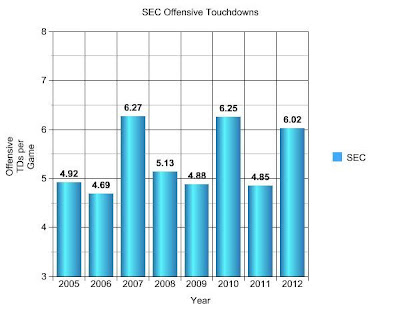 Like the Big 12, the SEC conforms to its stereotype. The SEC has finished with the worst offensive numbers (or best defensive numbers depending on your point of view) in three of the past eight seasons, and has finished in the top-half of BCS conferences in offensive touchdowns just once (in 2007 when they finished second). While going through these numbers, I noticed something that gave me even more respect for the 2008 Florida team. In the 2008 SEC season, conference games featured just over five combined offensive touchdowns per game (5.13). Florida scored 44 touchdowns in their eight league games (an average of 5.5) meaning they scored more than double what the average SEC team did that season!