Vegas Has Your Number Part II: Bowl Games and the Spread

Last week on this fine web page, I looked at how accurately the point spread predicted the results of regular season games in 2012. For those folks who are lazy like me and don't want to click the link, I'll summarize concisely. The spread did a fine job, on average missing the actual result by 12.10 points. But bowl games are a different beast right? All that extra time off, coaches moving up to better jobs, coaches being fired, players distracted by all their bowl game swag has to make those games more unpredictable right? Once again, conventional wisdom is dealt a crushing blow. In the last eight postseasons beginning in December 2005, the betting line has differed from the actual bowl game result by an average of 11.93 points over 265 games, all but equal to the 12.10 difference in the 2012 regular season. The table below gives the average spread difference for each of the eight postseasons I examined begging with 2005. 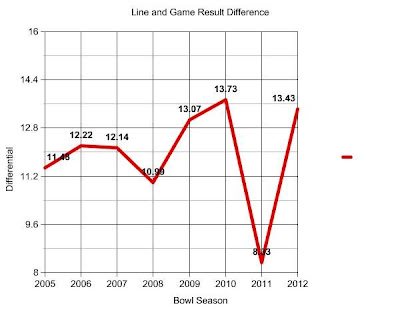 With the exception of 2011 when the point spread enjoyed an uncanny streak of predictability, the average difference has hovered within a three-point range from about 11 to 14. In addition, considering the sample size of bowl games for each postseason (between 28 and 35 for this study) is markedly fewer than that for most regular season weeks (all weeks featured at least 41 games except for the final weekend which saw just 19), the absence of any extreme variation is even more impressive.

Finally, as I did last week, I looked at how often the point spread came within a certain point toal of the actual result. I considered four ranges, and while they are arbitrary, I think they do a good job of sorting the numbers out. The ranges I used were 0-7 points (spread within one touchdown), 7.5-14 points (within two touchdowns), 14.5-20 points (almost three touchdowns), and 20 or more points (seemed like a good cutoff point). 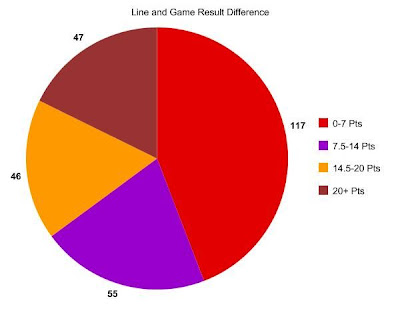 Over 44% of the bowl games played since 2005 have come within one touchdown of the actual result! Consider that for the 2012 regular season, the betting line achieved that level of accuracy just over 37% of the time. Based on this look at the betting line and bowl games, I think it is safe to conclude that Vegas is just as accurate (if not a tiny bit more so) when forecasting postseason games as when doing the same for regular season contests. If you weren't aware of this already, a lot of expert information goes into determining the spread. My advice for retiring early? Give up on trying to beat Vegas and switch to Powerball.
By matt